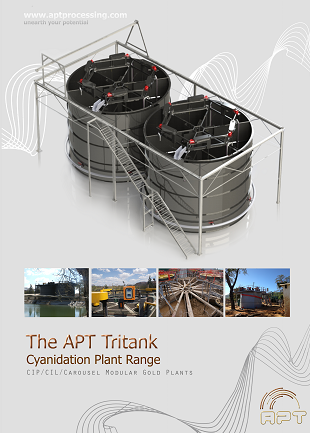 Peacocke & Simpson has been heavily involved in the conception and development of sectorial leaching tanks, now licensed to Appropriate Process Technologies for commercialisation.

​​Any experienced process engineer – even an inexperienced one – would consider a triangular mixing tank as being totally ridiculous. Then again, not long ago they said we couldn’t put a man on the moon, or send documents and drawings via electronic transmissions, wirelessly at that. Right now we’re probably not far off from “beam me up Scotty” when we can wirelessly put a man on the moon.

Perhaps APT’s TriTanks won’t have such a huge impact on humanity, but they will do on the minerals process industry, more specifically gold leaching. There are obvious advantages purely on the outside:

Even so, mixing in a triangular tank just doesn’t sound right, or easy. It still sounds ridiculous. And it probably would be, were in not for APT’s special design of the tank base and mixer system.

This ensures that there are no dead zones in the tanks, and that sanding-out is eliminated, even in corners where logically sanding would occur. APT’s TriTank tank base and mixer design results in high upflow velocities in tank corners, and total top-to-bottom mixing in a figure-of-8 pattern. In other words true and complete mixing, and uniform pulp and carbon distribution.

Laboratory bead tests indicate that TriTank mixing is 15-20% closer to “ideal” mixing than that in baffled circular tanks, which in turn translates to better mass transfer. Together with this, enhanced DO levels due to high surface vortexing can have a significant effect on leach kinetics, and uniform carbon distribution with better mass transfer can of course impact on adsorption rates.

There are indications (due for field testing shortly, in a 2 x 320m3 pilot plant) that higher-than-usual pulp densities may also be possible without affecting carbon distribution, and higher pulp densities have obvious implications on tank volume, reagent dose requirements, etc.

All in all, APT TriTanks, far from being ridiculous, look like being a no-brainer. Like most APT products, a little bit of out-the-box thinking has resulted in novel ideas with huge implications.

Celebrating 25 Years with Knelson
For queries, quotations and more information Contact us